Blockchain and energy have never gone well together. When cryptocurrency became extremely popular  in December 2017 and the value of Bitcoin increased by incredible 2,000%, its carbon consumption skyrocketed. New York Times published information about analysts who calculated that obtaining a single Bitcoin now requires electrical power roughly equivalent to running an average household in the United States for two years. Meteorologist Eric Holthaus, in his turn, says that by February 2020 the Bitcoin network could “use as much electricity as the entire world does today.”

Sounds not very cheerful, right? Despite all the good things that the blockchain brings to our world and its undeniable advantages compared with other technologies, its footprint to our environment is harmful and not at all beneficial. EOS strives to decrease the energy consumption of its blockchain as much as possible and is quite successful in this endeavor.

Recently, GenerEOS published an analytical article where he showed exactly how EOS strives to reduce its energy consumption.

But first things first. Why exactly the Bitcoin`s energy consumption is so high? The answer is simple: as Bitcoin uses a POW (Proof Of Work) mechanism, this mechanism is so costly and time-consuming that it effectively consumes the same amount of electricity as the nation of Argentina. In fact it’s a huge 73.1 TWh* which, according to GenerEOS, is the yearly electricity use in Africa. This is not even the main problem. Bitcoins are mostly mined and operated by using coal-fired power plants in China. In fact, coal mined crypto-currencies dominate the market by a staggering 70%. As we know, the coal mined energy is one of the most toxic energies there is on the current energy market.

So what exactly does EOS do to make energy consumption smaller?

EOS is based on a Graphene technology. With its multi-lane processing capacity using Delegated Proof of Stake consensus algorithm (DPoS), the EOS network operates with 21 elected Block Producers and 53 stands by Block Producers ready to stand in at any point as voted by token holders.

These calculations show and prove that EOS is 66,000 times more energy efficient than Bitcoin. As a result, EOS is working with much lower power consumption but at the same time, it delivers speed with a solid foundation. 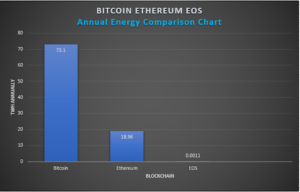 As you can see from this chart, EOS really strives to do something good for the environment. It aims to bring to the world the best features of the blockchain and at the same time not to pollute the one thing we will always need and depend on: our environment.

You can read the GenerEOS article with more information and calculations here: https://medium.com/@generEOS/eos-energy-consumption-vs-bitcoin-and-ethereum-2d1bb31ed72f